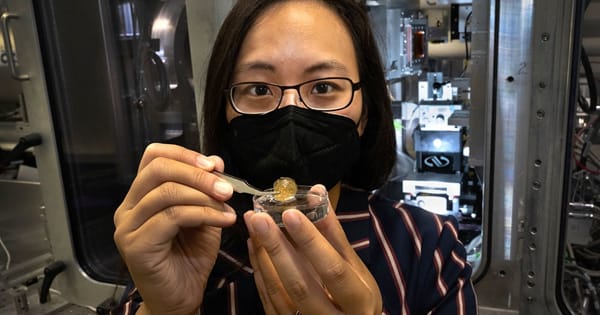 An international research team led by the Paul Scherrer Institute PSI has discovered why the protective cover of the brachiopod Discinisca tenuis softens in water and hardens again in the air. The findings were published in the journal Nature Communications.

Discinisca tenuis is a brachiopod found on Africa’s west coast. It is protected from harmful environmental influences by a mineral-rich shell. Bathing the shell in water causes a structural change in the material: the flat, hardshell softens and becomes so flexible that it can be folded up without breaking. The researchers used the Swiss Light Source SLS to figure out exactly how this transformation occurs.

Fabio Nudelman, a materials chemist at the School of Chemistry at the University of Edinburgh in Scotland, discovered the phenomenon by chance a few years ago. Maggie Cusack, the newly appointed president of Munster Technological University in Ireland, had given Nudelman shells of the brachiopod Discinisca tenuis, which originated in Namibia. When he wanted to wash the hard object, it became soft and flexible when it came into contact with water. The shell had absorbed liquid, altering its structure. The process was reversible: as the shell dried, it hardened and became brittle again.

An international research team with participation of the Paul Scherrer Institute PSI has deciphered why the protective cover of the brachiopod Discinisca tenuis becomes extremely soft in water and gets hard again in the air.

Nudelman set out to discover what exactly happens during this unexpected transformation with colleagues from six countries. “The shell’s composition is similar to bone,” he explains. “However, bone’s structure does not change when wet.” The same is true for clams: if the animals need to adapt the properties of their shell to changing environmental conditions, they must rework the material in a time-consuming and energy-intensive process of resorbing and redistributing minerals. It does not work solely through water absorption.

Hybrid material with a special trick

Cryo-tomography, performed at the Swiss Light Source SLS, “opened the door to reveal the secret,” according to Johannes Ihli, a PSI researcher at SLS. The researchers used this technique to examine the material as if it were under a very high-resolution microscope, but at extremely low temperatures. “It would not have been possible at room temperature because the high-energy X-ray light would have immediately altered the sensitive shell structure,” Ihli explains.

The brachiopod’s shell, which is only half a millimeter thick, is made of a hybrid material composed primarily of inorganic minerals with organic polymers derived from proteins and sugars embedded. Bones, clam shells, and teeth are all made of a mix of organic and inorganic material. The main component of the shell is a type of fluoroapatite, which is similar to the material that makes up the enamel on our teeth.

This material’s nanocrynano crystalsstals are arranged in layers. “In this analogy, the bricks are the nanocrystals, and the mortar between the bricks consists of organic molecules such as chitin and proteins,” Nudelman says. This “mortar,” as the researchers discovered, can absorb a large amount of water, causing it to swell. Its structure changes as a result of water storage: it softens and the bricks become movable with respect to one another. “Water then acts as a lubricant between the individual nanocrystals,” explains Ihli. “The crystals will then be able to slide against each other.”

Through this movement, the shell becomes flexible. The researchers found a network of pores in the shell that was especially effective in guiding water inside and rapidly distributing it throughout the material.

Discinisca tenuis lives in large groups in tidal zones along the coast, where the animals are exposed to either strong waves or calm waters depending on the tide. According to the researchers, it is probably advantageous for the animals if they can quickly adapt the softness or hardness of their shell to the situation: “This could prevent damage to the shell and thus be a key to the animals’ survival,” they write in the study. The phenomenon may be more widespread than previously thought: “We don’t know how many other animal species have this kind of property,” Nudelman says.

Aside from biology and evolution, the newly discovered information is also of interest in materials science: The development of a hard, brittle material with controllable stiffness could hold promise for a wide range of applications. Sports clothing or helmets, for example, may be able to adapt to movements and always provide the necessary protection depending on the impact. Exploiting this phenomenon could also help in the development of bone-replacement materials.