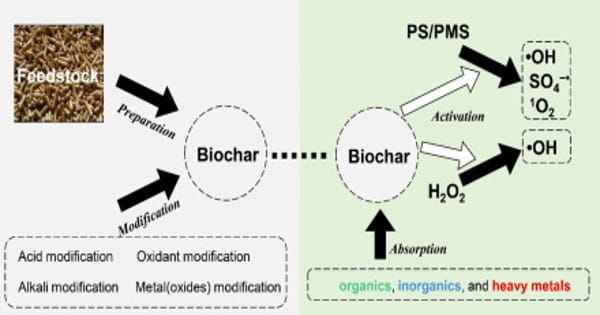 Biochar is a carbon-rich material produced by the pyrolysis of solid waste (e.g., agricultural solid waste and sludge from wastewater treatment plants). Biochar is inexpensive, has a large specific surface area, and has a high adsorption capacity. By modifying and loading nanoparticles onto biochar, new biochar composites can be created. Biochar has the potential to aid in the dispersion and stabilization of nanoparticles.

Red mud is a bauxite residue produced by the aluminum industry’s Bayer process. More than two billion metric tons of red mud were piled up at random around the world, wasting land resources and causing severe environmental pollution. Corn straw is a common agricultural solid waste, with more than 200 million metric tons produced in China each year. The best way to dispose of solid waste is to exploit it.

Because of its wide availability of raw materials, high surface area, developed pore structure, and low cost, biochar (BC) has shown a great potential to remove water contaminants. However, the use of BC for water remediation has numerous limitations. Driven by a strong desire to overcome disadvantages, an increasing number of researchers have worked to develop BC-based composite materials that not only improved the physicochemical properties of BC, but also resulted in a new composite material that combined the benefits of BC and other materials.

Biochar can improve water quality, reduce greenhouse gas emissions from soil, reduce nutrient leaching, reduce soil acidity, and reduce the need for irrigation and fertilizer. Biochar has recently received a lot of attention, especially for its ability to remove potentially toxic elements (PTEs) from water and wastewater. Because of its high availability, high sorption capacity, and low cost, wood-based biochar is being considered as an alternative to commercial adsorbents such as activated carbon.

The FBCs demonstrated excellent neutralization performance due to the presence of alkaline substances (primarily calcium oxide CaO) and adsorption capacity on acidic dyes due to their high surface area, according to the researchers. Furthermore, because FBCs contain zero-valent iron, they can be collected using a magnet. This work provides an efficient approach to reuse waste and a novel technology for acidic dye wastewater treatment.

Biochar has the potential to be a useful agent in wastewater treatment, soil remediation, and gas storage and separation. Different biochar production technologies are briefly summarized, with an emphasis on feedstock pre-treatment and post-treatment. Biochar has been widely used as an adsorbent in wastewater treatment to remove toxic metals, organic pollutants, and nutrients. Engineered/designer biochar has a larger surface area, stronger adsorption capacity, or more abundant surface functional groups (SFG) than pristine biochar, representing a new type of carbon material with great application prospects in various wastewater treatments.