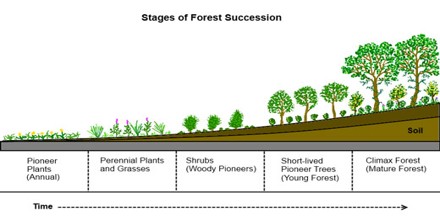 Succession: Within a few years or sometimes within a few months, living organisms begin to appear and a sequence of events known as succession takes place. Ecological succession is the process of change in the species structure of an ecological community over time. Many plant communities are not self-sustaining. A field in the temperate deciduous forest biome will remain a field only as long as it is grazed by animals or mowed regularly. This process is called  Plant Succession.

Steps of plant succession: Succession of plants at any new places takes place by the following steps:

Active Absorption of Water in Plants from Soil