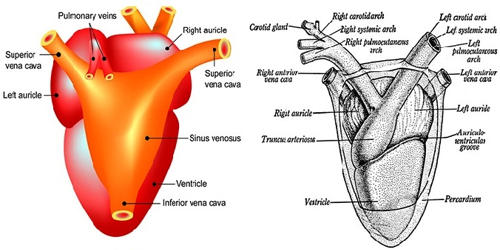 The circulatory system is the internal transport mechanism by which nutritive materials, hormones, waste products, carbon dioxide, and oxygen are conveyed to the different parts of the body. To sustain life toad requires food and oxygen. Body cells cannot directly take the ingested food substances and oxygen from the air. So digested food substances and oxygen from air are required to reach each cell. Similarly, it is required to expel carbon dioxide and other wastes from the body formed as a result of metabolism. The circulatory system of the toad is similar to humans but they have only one ventricle in their heart instead of two. The heart is a pump that carries deoxygenated blood to the lungs and oxygenated blood from the lungs to the rest of the body. 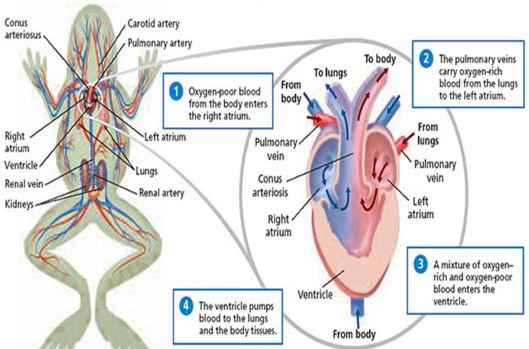 For this reason, an efficient transport system is built into the body of the animal. Blood and lymph work as internal transport media. Blood and lymph supply oxygen, hormone, and digested food to the cells and help in the egestion of excretory products of cells. This process is called circulation.

Since toads have only one ventricle, the blood flows from both atriums into one ventricle so it has both oxygenated and deoxygenated blood in it. The heart is specially made like this so that the toad has the ability to stay underwater longer.

The circulatory system is formed of blood, heart, blood vessels, and lymph vessels.

Blood is the main circulatory fluid. It consists of a straw-colored fluid called blood plasma and different blood corpus­cles suspended in the plasma. The plasma is a watery liquid and contains many mineral salts, food, wastes, and hormones. The blood of the toad is red. It is produced from the mesoderm cell layer of the embryo.

The heart is the most important organ of the circulatory system. It is a sort of pump in the body of a toad. It is the central pumping organ in the cardiovascular system. In toad, it is a pear-shaped muscular structure situated in the anterior part of the body cavity. The heart of the toad is composed of the receiving parts and forwarding parts. The receiving parts include two auri­cles and a sinus venosus. The ventricle and the conus arteriosus are the forwarding parts of the heart.

The arteries and veins are the blood vessels through which the blood circulates. These vessels are different in structure and function. The arteries break up into finer branches, the arterioles which finally end into a network of capillaries. These capil­laries again reunite to form small venules. The venules unite to form the veins.