If two genes for a particular characteristic are dissimilar in nature the genotype of these two genes are called heterozygous. The cell or organism is called a heterozygote specifically for the allele in question, and therefore, heterozygosity refers to a specific genotype.

Explanations: If at cross is made between a pure tall “TT” and a pure dwarf (tt) plant the genotype of the first filial generation (F1) will be “Tt”. Here; genotype of the “Tt” is heterozygous. If an organism is heterozygous for a gene, or possesses one of each allele, then the dominant trait is expressed. A recessive allele is only expressed if an organism is homozygous for that trait, or posses two recessive alleles. 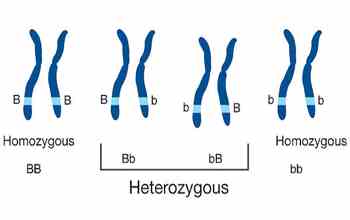 Relationship between Gene and Enzyme

Define and Describe on Allelomorph or Allelic Gene