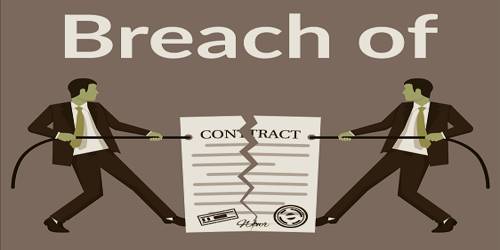 Important Remedies for Breach of Contract

A breach of contract is a violation of any of the agreed-upon terms and conditions of a binding contract. A business contract creates certain obligations that are to be fulfilled by the people or companies who entered into the agreement.

When lawyers talk about “remedies in law”, they are talking about money damages. For breach of contract cases, there are several different types of monetary remedies:

(b) Restitution: When a court orders restitution, they tell the person that breached the contract to pay the other person back. In the example above, the court would order the first cleaner to pay you back $100, since that’s what you paid him to dean your house.

(c) Punitive damages: This is a sum of money intended to punish the breaching, party, and is usually reserved for cases in which something morally reprehensible happened, such as a manufacturer deliberately selling a retailer unsafe or substandard goods.

(d) Nominal damages: A court awards nominal damages when there has been a breach contract but no party to the contract suffered any harm.

(e) Liquidated damages: These are damages that the parties agree to pay in the event contract is breached.

(f) Quantum Meruit: A court can award one party payment for what they deserve for any work that she performed before the other party breached the contract. For example, if the cleaner in the example above had cleaned half the house, and then you decided you didn’t want him to finish, he can demand $50 as quantum meruit. Translated from Latin, the term means “as much as he deserved.”