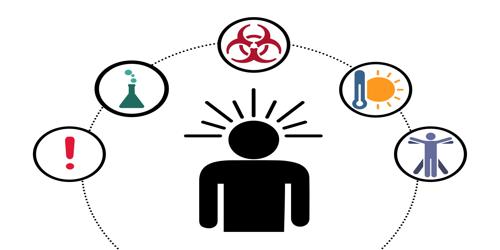 A risk is the chance of loss, and peril is the direct cause of the loss. If a house burns down, then fire is the peril. A hazard is anything that either causes or increases the likelihood of a loss. For instance, gas furnaces are a hazard for carbon monoxide poisoning.

(b) Moral hazards are losses that result from dishonesty. Thus; insurance companies suffer losses because of fraudulent or inflated claims. The American legal system is a moral hazard in that it motivates many people to sue simply for financial profit because of the enormous amount of money that can sometimes be won, and because there is little’ cost to the plaintiff, even if he loses. A good example is the current asbestos litigation, which has bankrupted many companies, even though very few plaintiffs show any real evidence of disease, and are unlikely to ever develop any disease that can be shown, by the preponderance of the evidence, to have resulted from asbestos exposure. This type of moral hazard is often referred to as a legal hazard. Legal hazard can also result from laws or regulations that force insurance companies to cover risks that they would otherwise not cover, such as including coverage for alcoholism in health insurance.

(c) Morale hazard; Insurance can be regarded as a moral hazard because it increases the possibility of a loss that results from the insured worrying less about losses. Therefore, they take fewer precautions and may engage in riskier activities – because they have insurance. A good example of moral hazard is when the federal government bails out financial institutions that have made bad decisions. Many financial institutions have taken significant risks in the recent subprime debacle by buying toxic instruments, such as CDOs and mortgage-backed securities based on subprime mortgages that paid high yields but were extremely risky.