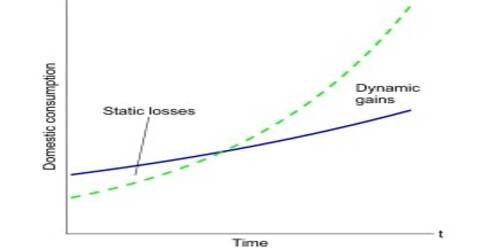 Static Gains – Static means a stationary state. So we are interested in the immediate effect of the trade. Thus, Static gains are the immediate gains accruing to parties directly affected by trade. i.e. gains accruing (i) to the producing sector of the commodities that are being traded and (ii) to the consumers of these commodities in both countries. The static gains from trade are measured by the increase in the utility or level of welfare when there is an opening of trade between the countries.

Maximization of Production: According to the classical economists, the gains from trade result from the advantages of division of labor and specialization both at the national and international levels.

Increase in National Income: When a country gains from international specialization and exchange of goods in trade, there is an increase in its national income.

Vent for Surplus: The gain from trade also arises from the existence of idle land, labor, and other resources in a country before it enters into international trade.

These gains can be further summarized as –

(i) The exporting sector in both countries gain on account of

(ii) The consumers in both countries gain as –

Causes of Disequilibrium in the Balance of Payments