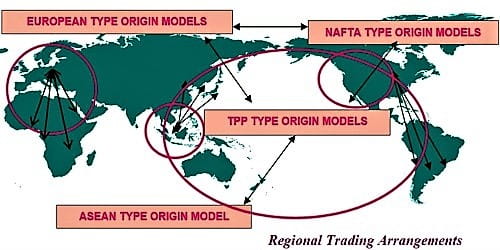 The World Trade Organization (WTO) is a forum for negotiating and formalizing agreements between nations, as well as resolving disputes. It is the international body dealing with the rules of trade between nations. Its goal is to supervise and expand international trade, monitor national trade policies, and provide technical assistance to developing nations. A regional trade agreement (RTA) is an agreement between two or more governments that describe the rules of trade for all signatories. Examples of regional trade agreements include the North American Free Trade Agreement (NAFTA), the European Union (EU) and Asia-Pacific Economic Cooperation (APEC).

In February 1996, the WTO General Council set up a single committee to oversee all regional trade agreements, replacing separate working parties, each dealing with a separate agreement. The Regional Trade Agreements Committee also looks at the broader, systemic implications of the agreements for the multilateral trading system, the relationship between them, and encourages adequate reporting by countries that have signed these agreements. In recent years, many countries have energetically sought to establish new – and often more modern and progressive – bilateral and regional trade agreements that aim to increase trade and boost economic growth.

Up to May 2003, over 265 regional trade agreements had been notified to the WTO and before it to GATT. Of these, 139 agreements notified under GATT Article 24, 19 agreements under the Enabling Clause and 26 under GATS Article 5 are still into force today. The committee has currently under examination more than 125 agreements. The current proliferation of RTAs reflects, in part, demand for deeper integration than what has been achieved by older multilateral agreements.

(1) The Regional Trade Agreements Committee has developed procedures to examine the agreements, including compiling information. They include free trade agreements and customs unions. These procedures are for assessing whether each agreement is consistent with WTO provisions. Since there is no consensus among WTO members on how to interpret the criteria for assessing this consistency, the committee now has a lengthening backlog of uncompleted reports. Policymakers are watchful that regional trade agreements must be reliable with multilateral rules and that consistency across regional arrangements, as well as between regional and multilateral systems, is essential. Today, RTAs are developing in ways that go beyond existing multilateral rules.

(2) As the number of regional agreements increases, so does the need to analyze whether the WTO’s rules on these agreements need to be clarified further. WTO members differ on whether regional agreements help or hinder the multilateral trading system – whether they function as “building blocks” or “stumbling blocks”. One view is that the regional agreements strengthen the multilateral system because they can move faster and because they can help integrate developing countries into the world economy. Next-generation RTAs strive to go even further. Countries wishing to participate in, and benefit even more from, global markets will need to increasingly integrate trade and investment measures in their wider domestic structural reform agendas. Other countries believe that the WTO’s rules should be revised – and not just reinterpreted — so that the two systems can work together better, particularly since the number of agreements has increased, and their membership has increasingly overlapped.

Different rounds of GATT and WTO