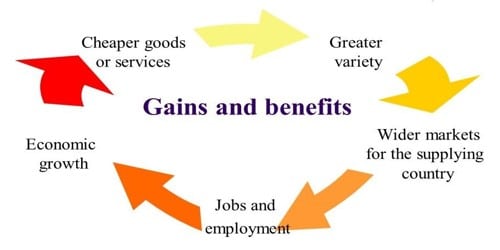 A gain from trade is the capability of two agents to augment their expenditure possibilities by specializing in the good in which they have comparative advantage and trading for a good in which they do not have a comparative advantage. International trade arises from the reality that no nation is self-sufficient in term of producing all the goods and services that it requires. This kind of deal gives increase to a global economy, in which prices, or supply and demand, affect and are affected by global events.

The economic gains of international trade are –

Economies that have in the past been open to foreign direct investments have developed at a much quicker pace than those economies closed to such investment e.g. communist Russia.

This is down to the simple fact that if we reduce the barriers imposed on imports (e.g. tariffs, quota, etc) then the imports will fall in price. Trade is a stimulus to the exchange of ideas and inflow of human capital. Openness to trade allows imports of capital equipment at lower prices.

By having an open economy we can bring in new technology as it happens rather than trying to develop it internally. Growth through trade directly benefits the world’s poor although free trade is not necessarily equitable.

Foreign competition will encourage domestic producers to increase efficiency. Carbaugh (1998) states that global competitiveness is a bit like golf, you get better by playing against people who are better than you.

Multination will bring up average wage levels because if the multinationals were not there the domestic companies would pay less. Trade enhances choice and stimulates innovations bringing better products for consumers.

With globalization, companies can move the capital to whatever country offers the most attractive investment opportunity. This prevents capital from being trapped in domestic economies earning poor returns. Trade encourages firms to exploit scale economies leading to lower average costs that might be passed onto consumers in the form of lower prices

Countries exp6it their goods and services all over the world. This helps to earn valuable foreign exchange. This foreign exchange is used to pay for imports. Foreign exchange helps to strengthen the economy of Its Country. All counties engaged in open trade and exchange stand to gain – although the gains from trade may not be equal – we live in a world of growing trade imbalances

Static gains from trade refer to the augment in construction or wellbeing of the people of the trading countries as a consequence of the optimum distribution their particular factor-endowments if they concentrate on the basis of their comparative costs.

On the other hand, dynamic gains refer to the assistance which foreign trade makes to the in general financial growth of the trading countries.

Establishment objective of International Monetary Fund and its criticism