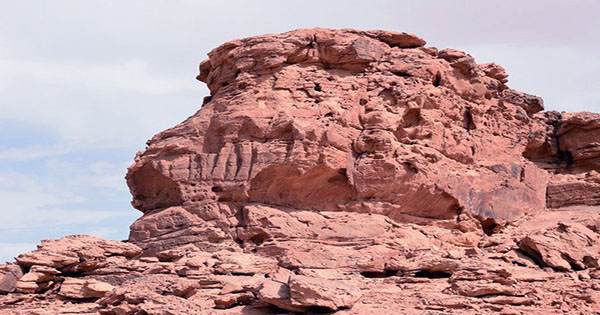 Three years ago, the world learned that rock spurs in northern Arabia had been cut into life-size images of camels, horses, and donkeys. Despite deteriorating nearly completely to invisibility, 21 quadruped reliefs have been discovered deep in the desert at the Camel Site. These have now been discovered to be four times older than previously thought, dating from the Neolithic period. Because stone carvings are difficult to date, early estimates of the Camel Site’s age were based on parallels to recognized sites.

The engravings were assumed to be the work of the Nabataeans, Roman contemporaries whose realm ran from the Euphrates to the Red Sea, because the style had enough in common with the famed city cut from the rock at Petra, Jordan. Scientists report in the Journal of Archaeological Science Reports that the true age of the artifacts is close to 8,000 years, implying that they were created in the 6th millennium BCE. These engravings not only precede the Egyptian pyramids and Stonehenge by centuries, but they also predate Mesopotamian ziggurats by up to 2,000 years, making them among of humanity’s oldest three-dimensional major products.

The Camel Site is now located in a hard desert. The site was thought to be a stopover station on a trade route because conditions were wetter in Nabataean times, but not by much. The land, however, was once part of the savannah, with lakes providing water for herding livestock and scattered trees providing shade from the sun.

According to the research, “we can now link the Camel Site to a period in prehistory when pastoral populations in northern Arabia developed rock art and built massive stone structures known as must til.” “As a result, the Camel Site is part of a larger pattern of activity in which groups got together frequently to build and identify symbolic places.”

Because there is no single method for accurately determining the age of carvings like these, lead author Dr. Maria Guagnin of the Max Plank Institute for the Science of Human History and the rest of the team used a combination of methodologies to arrive at a reliable result. The varnish on the rocks was measured using X-ray fluorescence spectrometry, and fallen bits were studied using luminescence dating, which tells how long they have been exposed to radiation at the surface. Radiocarbon dating was used to determine the age of animal remains that could have been present at the time of the sculptures, as well as erosion patterns and tool marks.

In a statement, Guagnin said, “Neolithic populations continually returned to the Camel Site, implying that its symbolism and function were maintained over many generations.” “It’s now critical to preserving this site, as well as future studies in the area to see if more such sites existed. With each passing year, more reliefs will be lost to erosion, and time is running out for the preservation of the Camel Site and the prospective identification of further relief sites.”