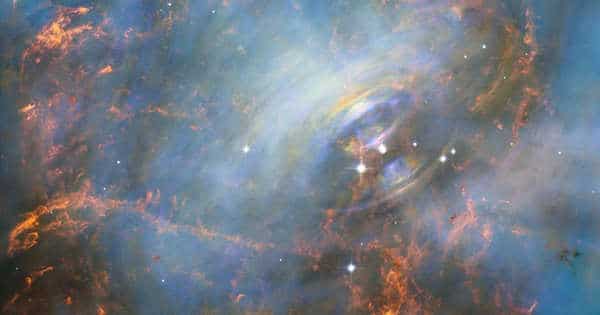 For the past 40 years, astronomers have proposed an electron-capture supernova class but have been unable to prove its existence. However, in Nature Astronomy, astronomers from 25 institutions have collaborated to provide evidence for one such event. Furthermore, their work establishes that one of the most well-known supernovas of all time falls into this category.

There are two types of supernovas: giant stars that undergo core-collapse when the outward force of their fusion can no longer overcome gravity, and white dwarfs that pull enough material from their neighbors to cause a thermonuclear explosion. Within these two, there are confirmed and proposed subclasses, but electron-capture supernovas would be a genuine third class.

The mass of a core-collapse supernova must be at least ten times that of the Sun in order to create the pressure necessary to forge the iron that comes to make up their cores. According to the theory, electron-capture supernovae occur in stars with 8–10 solar masses, have oxygen-neon-magnesium cores, and never produce their own iron.

Supernovas are highly violent cosmic events that mark the end of a star’s life cycle. Now, astronomers have solved the mystery behind an elusive kind of supernova, which may be able to explain the birth of hypnotizing “Crab Nebula”.

The theory goes that if the immense pressure at the center of these stars is great enough to squeeze the electrons surrounding these atoms into the neon and magnesium nuclei, the space between atoms will shrink. This would cause the core to implode, resulting in a rebound explosion rather than the star becoming a white dwarf, as a lighter star would.

Since Professor Ken’ichi Nomoto of the University of Tokyo proposed this idea in 1980, astronomers have attempted to simulate how an electron-capture supernova would appear, particularly how it would differ from the known types.

Daichi Hiramatsu, a graduate student at the University of California, Santa Barbara, identified six distinct characteristics expected of electron-capture supernovas, including large amounts of material thrown off before the explosion and distinct light curves, chemical composition, and elements formed. Hiramatsu identified several that have some of these features after examining records from hundreds of recorded supernovae, but only one that ticks all of the boxes; SN 2018zd.

“We began by asking, ‘Who is this strangeo?'” Hiramatsu made the announcement in a statement. “Then we looked at every aspect of SN 2018zd and realized that they all fit into the electron-capture scenario.”

As expected, SN 2018zd was a squib by supernova standards – we might not have seen it at all if it hadn’t been in the galaxy NGC 2146, which is only 31 million light-years away. Because of this closeness, Hubble images taken before the explosion show a suspected SAGB star at the explosion’s location – exactly the type of star expected to produce electron-capture supernovas.

However, 2018zd is unlikely to be the first electron-capture supernova observed. In other cases, distance or timing constraints prevented us from gathering relevant data to evaluate some of the six indicators. A particularly notable example is the supernova of 1054, which left behind the famous Crab Nebula.

Because of the intensity of its X-rays, the Crab has become one of the most studied astronomical objects, and many have noted that it has a number of electron-capture features. Unfortunately, while Chinese astronomers of the time recorded many details, including its visibility during the day for 23 days and lingering for nearly two years, they lacked the ability to record its spectrum.

Despite this, Hiramatsu and colleagues believe that the similarities between SN 1054 and SN 2018zd strengthen the case for SN 1054 as an electron-capture system.

“I am very pleased that the electron-capture supernova, which my colleagues and I predicted to exist and have a connection to the Crab Nebula 40 years ago, was finally discovered,” Nomoto says. I greatly appreciate the significant effort put forth in obtaining these observations.”