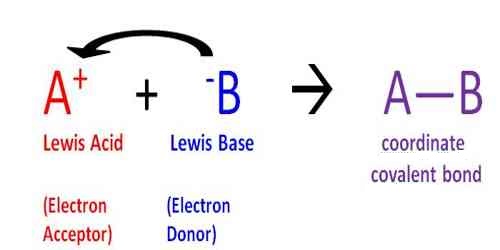 The Bronsted-Lowry theory is actually a special case of a more general theory of acids and bases as proposed by G. N. Lewis in 1932. Lewis pointed out that substance like SO3, BF3 which behave as acids in the solution does not contain any proton. According to the Lewis theory,

“An acid is a species (molecule, ion or radical) which can accept a pair of electrons from another species”.

“A base is a species (molecule, ion or radical) which can donate a pair of electrons to another species.”

A Lewis acid is, therefore, any substance, such as the H+ ion, that can accept a pair of nonbonding electrons. In other words, a Lewis acid is an electron-pair acceptor. In Lewis theory, the neutralization reaction leads to the formation of the coordinate covalent link between an acid and a base. An example is given below:

Lewis concept of acids and bases is more general than other definitions since many reactions that do not involve Bronsted-Lawry acid-base reactions are included in the Lewis’ definition. Some examples are given below:

The formation of carbonic acid from gaseous carbon dioxide and water is a Lewis acid-base reaction.

The hydration of gaseous carbon dioxide takes place in two steps as shown below, 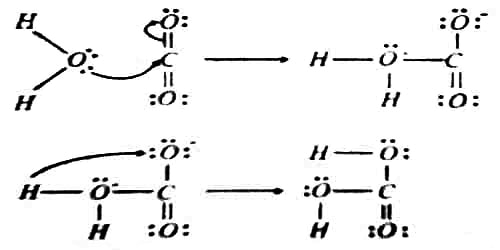 In the first step, a lone pair of electrons on the oxygen atom in water is donated to the carbon atom of carbon dioxide. Therefore water is Lewis base, and carbon dioxide is a Lewis acid. In the second step, a proton is transferred onto the O atom bearing a negative charge to form H2CO3.