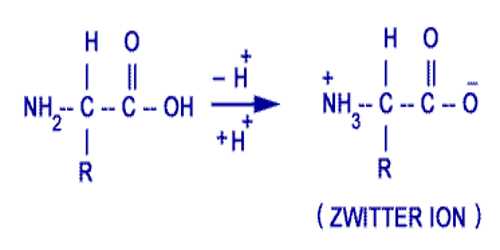 There are some substances which under one set of conditions act as a base and under another set of conditions act as an acid. Such substances are called amphoteric electrolytes. Notable among the amphoteric electrolytes are the amino acids. The simplest of the group is glycine which is written as H2NCH2COOH. The amino acids can be titrated both with alkalis and with acids, indicating that there are both acidic and basic groups in the molecule. From the known characteristics of the – NH2 and – COOH groups in other organic compounds it was formerly believed that the – NH2 group was the basic group reacting with acid and – COOH group reacted with alkali. From several evidences, such as the fact that these are solids at room temperature, x-ray crystal study of the amino acid crystal, titration in presence of formaldehyde etc., it is now strongly believed that the ammo acid should be written as;

The +NH3 group acts at the acid part and the – COO– end acts as the basic part. Such a bipolar molecule is called a Zwitter Ions. It should be recalled that the molecule as a whole is neutral. The reaction with an along acid should be written as;

and the reaction with a strong base should be,

Because these are ionic in acidic or basic medium, solutions of such substances are conductors of electricity. If at a certain pH the acid strength and basic strength become equal the particles do not move under an electrical field. That point it is said to be the isoelectric point.

Advantages of the Bronsted – Lowry theory

Effect of Change in Concentration on Chemical Equilibrium