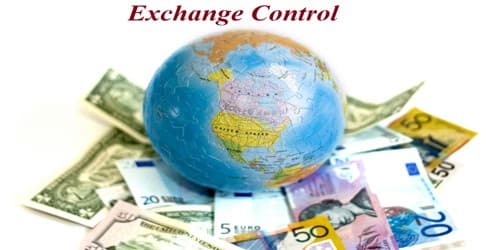 Exchange control is a control policy by Government of regulating the right of entry to foreign currency. There are numerous ways governments execute exchange control. These controls allow countries a greater scale of economic solidity by limiting the amount of exchange rate instability due to currency inflows/outflows.

There are two methods of exchange control. One is direct and other is indirect.

Direct Method: The central bank of the country, which is exchange control authority, adopts a number of direct methods, which restrict the use and quantity of foreign exchange. They are as under.

Exchange Restriction – All foreign currencies are pooled with, the central bank which in turn sanctions and allocates than in accordance with the rules laid down by the government.

Allocation according to priorities: This is the simplest method. As the foreign currencies available with the central bank are always limited in quantities, it will allocate then to finance imports and to make other foreign payments. It will do so in accordance with certain principles of priorities. All essential items of imports such as food, raw materials, capital goods, intermediate products, etc will be accorded priorities in allocating foreign exchange over non-essential and luxury imports.

Multiple Exchange Rates: When a country establishes different exchange rates for earn of several categories of imports exports and capita transfers it is known as the methods of multiple exchange rates. This system of exchange control is operated in w such a way that lie value of imports is reduced and the foreign value of exports is increased. The aim is to achieve the balance of payments equilibrium for the country by reducing imports and increasing exports.

Blocked Accounts: Under this system of exchange control, payments for import are credited to blocked accounts in the name of the foreign exporters. Such account may be kept in the central bank of the debt or country. The creditors are prohibited for some time from drawing on them. However, they can be used in the controlling country where such accounts are located.

Clearing Agreements: Under this method of exchange control, two trading countries agree to establish an account in their respective central bank through which all payments for export and imports are cleared. This method is known as bilateral clearing or clearing agreement of exchange clearing

Payments Agreements: Payment agreements are another form of bilateral agreements but they are wider in scope than clearing agreements. Beside trade transactions, they include various service transactions such as shipping charges, debt service, tourism, etc which are reflected in the balance of payments. A payments agreement is usually made for the repayment of the debt by one country to the other. Under this system of exchange control, a certain percentage of payments for imports by the credit or country are passed on to its clearing account for the repayment of its debt.

(a) Quantitative Restrictions: Quantitative restrictions or commercial control include import restrictions, import embargoes, import quotas and buying policies of state trading corporations. All these limit imports. Quantitative import control restricts the amount (in value or quantity) of the commodity to be imported. The aim is to curtail the value to correct disequilibrium in the balance of payments.

(b) Export Bounties: A bounty on exports has an effect of raising the external value of the country giving the bounty. But export bounties are limited by the number of funds with the government.

(c) Raising Interest Rates: Changes in the interest rates within a country also influences its foreign exchange rate. When interest rate increases in a country, it attracts capital funds from other countries and prevents the outflow of domestic funds to other countries. Consequently, the demand for its currency rises which raises its external value and makes the foreign exchange rate favorable to it.

How can Franchising help International Business?