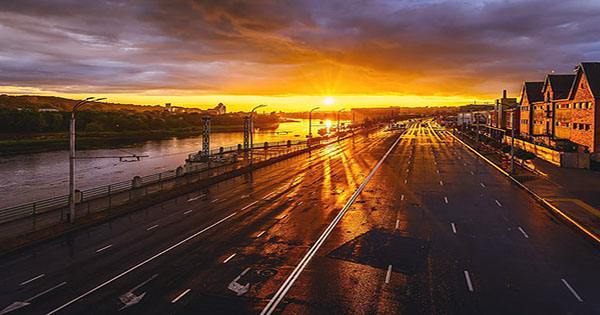 As the UK heats up in the scorching heat, the Met Office immediately issued the first severe heat weather warning in UK history. It followed record temperatures over the weekend, with temperatures reaching 31.6 degrees Celsius (88.9 degrees Fahrenheit) in some areas – but it is only expected to warm. Northern Ireland still has an amber warning for extreme heat and temperatures are expected to drop to 33 degrees Celsius in some parts of the UK. However, extreme heat leads to some potential (and catastrophic) events. On July 19, the powerful sun spontaneously erupted into flames at an unintentional bus stop in Solihull.

The West Midlands Fire Service quickly rushed to the scene and spread the flames, but a significant portion of the bus stop was cut off. “Thanks to our West Mids Fire Service for taking part in this wooden bus stop in Chelsea within minutes of calling today after self-immolation due to intense heat, drowning in flames, and the stop being safe.” Woods Police in Chelsea wrote on Twitter.

No one is expected to be injured in the incident, but it certainly begs the question of how much better Plexiglass shelters can rent than the unforgettable heatwave. So, how can a stiff Plexiglass shelter suddenly glow only from sunlight? No one knows for sure, but physicists have some ideas. The most likely explanation is an unusually high ambient temperature, too much for acrylic blades with angles of light hitting the plexiglass, which is flammable.

Plagigus, the original acrylic protection blade manufacturer, claims that their version can withstand up to 70 degrees Celsius (158 F), but it should be able to withstand higher temperatures before the flames explode. It fuses to a more reasonable temperature of 200 degrees Celsius – so that the flame bursts and melts so quickly, something else has to happen. If the angle of sunlight hits the right point, it is possible to get a similar effect to the total internal reflection. Radiation will be reflected inside the plasglass, which in certain circumstances can cause the metal frame to rise rapidly in temperature and the blade to melt.