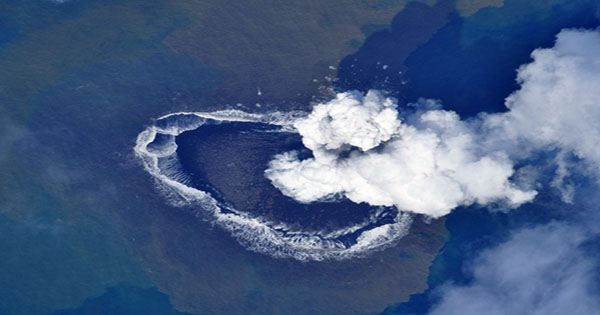 There are 6,852 islands in Japan, which is probably more than you expected. But this week that number has increased by one at least for now thanks to the eruption of the underground volcano Fukutoku-Okanoba. The new landmass is located about 1,200 kilometers (745 miles) south of Tokyo, near the island of Iwo Jima. It debuted on August 13 but was not mentioned by the Japanese Coast Guard two days later.

They reported eruptions of steam and gas up to 15 kilometers (9.3 miles) above the sky – for reference; this is the upper limit of how high planes can fly before they are damaged – as well as fragments of pumice caused by explosions. Floating across a 60 km (37 mi) wide area of ​​the ocean, eventually, the Coast Guard was able to create the shape of a new island: a crescent. At the moment, the new island is just a child – just 1 kilometer in diameter. But the Japan Meteorological Agency believes the eruption is still ongoing and they have issued smoke and ash warnings for the region while monitoring volcanic activity.

According to Forbes, the expectation is that the entire Caldera of Fukutoku-Okanoba a large faucet-like depression that results when a magma chamber in a volcano empties and collapses on its own could eventually rise above sea level. If the new island proves lasting stability, it could have geopolitical implications. It is located near the southernmost island in Japan’s Ogasawara or Bonin Islands chain, so it could cause Japan to expand its territorial claim, albeit a few hundred meters – although local media say the island is above ground.

You’re right, whatever it is – the island may not be stuck. This may sound strange, but Japan has some terrestrial history that disappeared only later: the new islands, confirmed in 1904, 1914, and 1986, disappeared very quickly. The last of these lasted only two months due to erosion from recent waves and currents. Sometimes they go missing and it takes time to get noticed. On the other hand, some islands have proven to be more permanent. In 2013, a volcanic island called Niijima became so large that it merged with a neighboring landmass and gave the world the gift of “Snoopy Island”.

WWF report says, Our “Broken Relationship” With Nature Could Lead To More Pandemics