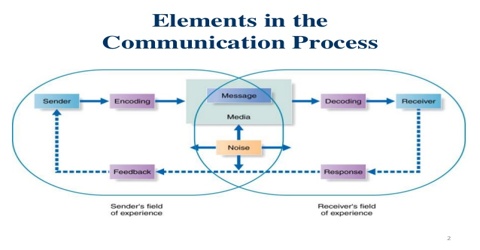 Steps or Elements of Communication Process

(1) Developing idea by the sender: In the first step, the communicator develops or conceptualizes an idea to be sent. It is also known as the planning stage since in this stage the communicator plans the subject matter of communication.

(2) Encoding: Encoding means converting or translating the idea into a perceivable form that can be communicated to others.

(4) Selecting the Medium: Medium is the channel or means of transmitting the message to the receiver. Once the sender has encoded his idea into a message, the next step is to select a suitable medium for transmitting it to the receiver. The medium of communication can be speaking, writing, signaling, gesturing etc.

(7) Decoding: Decoding is the receiver’s interpretation of the sender’s message. Here the receiver converts the message into thoughts and tries to analyze and understand it. Effective communication can occur only when both the sender and the receiver assign the same or similar meanings to the message.