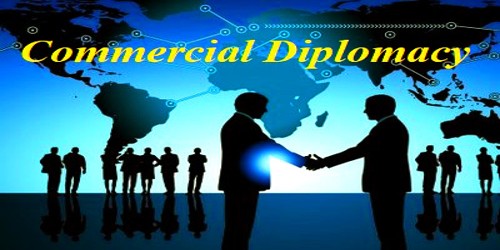 Commercial diplomacy is a subtype of Diplomacy. It concerns an activity conducted by public and private actors with diplomatic status to support business promotion between a home and host country. It aims at generating commercial gains in the form of trade and inward and outward investment by means of business and entrepreneurship promotion and facilitation activities in the host country.

Practitioners of commercial diplomacy are usually trade officials who are charged with negotiating international trade and investment agreements and resolving policy conflicts that an impact on international commerce. Officials from departments or ministries responsible for foreign affairs, finance, agriculture, industry, labor, or the licensing of professionals can be commercial diplomats. Advocacy tools include letters, testimony, white speeches, phone calls, and decision-makers. Some authors also include the role of the private sector. In their definition commercial diplomacy contains “the work of a network of public and private actors who manage commercial relations using diplomatic channels and processes”.

Commercial diplomacy is a matter of growing concern for governments and business alike. Commercial diplomats located abroad assume business facilitation activities in the field of trade, investment, tourism, country image, and promotion of science and technology. They are also involved as facilitators in business conciliation and dispute settlement.

Example: Australia, Canada, and New Zealand separate trade policy and trade promotion activity. These have no hierarchical subordination to the embassy and work separately. The embassy only tackles political affairs and the political measurement of trade.

Commercial diplomacy is defined as the application of the tools o diplomacy to the removal of barriers to trade and investment, and to the resolution of policy conflicts arising from the globalization of the world economy. To elaborate on this definition, the tools of diplomacy includes negotiation, creating operational documents, public arid private communication; analysis (especially in the fields of economics, politics, law, and social relations). Commercial diplomacy regularly deals with tactical trade strategy, international co-operation in the area of science or research and development (R&D), and access to supplies for energy resources

or other materials. The removal of trade and investment barriers in Developing Country allows the free flow of people, goods, Services, information, arid capital across national and regional borders. Some small and middle-sized countries inquire the question of whether diplomacy at all should completely focus on commercial diplomacy in order to survive in the age of improved globalization and competition.  The removal may be affected by private commercial interests and organizations, as well as the domestic and international governing institutions and agencies.