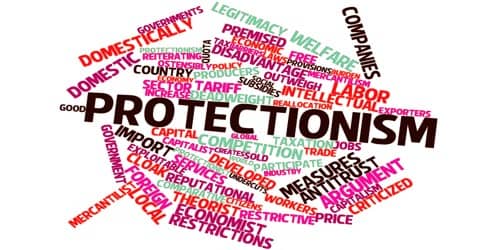 Protectionism is the theory or follows of protecting a country’s home industries from overseas competition by taxing imports. It is necessary for most developing countries. It represents an attempt to impose restrictions on trade in goods and services.

The economist provides various arguments for protectionism. The most familiar argument for protectionism is that before a country can contend globally it needs time to develop its own industries. This is sometimes called the infant industry argument. Some of them are discussed below.

It was first put forth by Alexander Hamilton in 1792. This thought states that new manufacturers have an exceptionally hard time challenging against well-established, well-funded, enormously profitable companies in developed countries. New manufacturers in developing nations might not have the financial and economic resources, as well as the skill, physical equipment, and research and expansion proficiency to compete against older, established firms.

The economists said that all of the arguments or protectionism is fallacious because it can be a way to survive their market for a certain time but cannot be a final solution.

Some economist believed that protectionism can create an environment for ‘creating regional industries.

Changes in comparative advantage may require adjustments in the structure of an industry and these may take some time. While they are taking place there may be employment costs from the changeover.

Free trade may lead to firms relocating to where environmental and other regulations are most lax. This could cause long-term environmental problems.

It argued that industrial development through protection increases employment opportunities in a country.

National resources are damaged for lack of proper uses. That can be used by the increase of domestic industries.

The government also benefited from protectionism. They get revenue from high tariff and also achieve revenue from domestic industries.

Many economists suggest imposing high tariff and other methods of protectionism for controlling Balance of Payment.

Sometimes foreign industries sell a product at a low price than their local market price for acquiring market. Protectionism is the only way to control this policy.

The main space of this argument is to nurse and protect infant industries from foreign competition by using protectionism.

It is an argument used by policymakers to protect consumers from insecure imported products. Consumer advocates, home manufacturers, and certain policymakers argue that foreign-made goods might fail to follow requirements for product security in the manufacturing and distribution process.

Arguments in favor of protectionism –

To accurate balance of payments disequilibrium – as demand for imports is dampened and exports promoted. This makes the domestic output appear to be more competitive.

Source of government revenue – Tariffs form a good source of revenue for governments.

To avert labor exploitation in developing economies – this is actually a moral argument as it rests on making imports more accurately reflect their true cost of production. However, it might also reduce imports from some of the poorest economies in the world.

To prevent dumping – which is where economies sell goods in overseas markets at a price below the cost of production. Domestic consumers pay more than those buying overseas. Such low prices are part of a policy to destroy rivals in export markets.

To safeguard infant industries – like shifts in comparative advantages arise, so some countries become able to enter new markets. Their fledgling industry needs some protection from the power of already established competitors.