Home Business Do you think WTO is reducing trade protection? 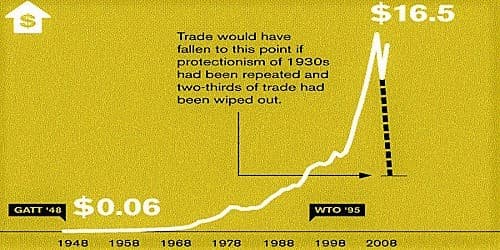 The World Trade Organization (WTO) is the international body dealing with the rules of trade between nations. Its goal is to supervise and expand international trade, monitor national trade policies, and provide technical assistance to developing nations. In 1944 IBRD, Accordingly, IMF and ITO were setups, but practically ITO could not come into being. Accordingly, the 23 countries of the world made an agreement to form GATT with the view of reducing the external tariff rates. These countries comprised the USA, UK, India, and Pakistan, etc. GATT was aimed at liberalizing world trade by removing all trade barriers. But it could not do all that was required to replace this trading institution; it was decided to set up the World Trade Organization (WTO) in 1994 in a meeting held at Kabat (Morocco).

The WTO’s top decision making the body is the Ministerial Conference, which meets at least once every two years. This body has had its conferences at Montreal (Canada) and Cancun (Mexico) like places, as its 5th conference was held in Cancun from 10 to 14 September 2003. Below this, is the General Council, normally ambassadors and heads to the delegation in Geneva represent their countries, sometimes officials sent from members capital also represent their countries. This council meets several times a year in Geneva where there is read a quarter of WTO. The General Council also meets as the Trade Policy Review Body and the Dispute Settlement Body. At the next level, the Goods Council, Services Council and Intellectual Property Council (TRIPS) report to the General Council. WTO policies are compulsory by individual member nations, which can compel disciplinary traffic sanctions on states that break them. The most essential is a commitment to openness, meaning reducing tariffs as well as limiting quotas, import bans, distorting subsidies, and other barriers to trade.

Free trade means that countries can import and export goods without any tax barriers or other non-tariff barriers to trade. As protectionism has happening to rule the roost, member nations are gradually more striking new trade limitations, include tariff increases, stricter customs procedures, the obligation of taxes and export duties. On the hypothesis that consultations on the present membership applications of over 20 countries are eventually accomplished effectively, the WTO will cover almost the whole of world trade. The World Trade Organization (WTO) is dedicated to lowering barriers to trade. It has a far wider scope than its predecessor, bringing into the mul­tilateral trading system, for the first time, trade in services, rational possessions protection, and investment. The world’s nations meet through the WTO to consult how they can decrease barriers to trade, such as tariffs. It is a full-fledged worldwide association in its own right while GATT was essentially a provisional agreement. The WTO has been and continues to be, a method for nations to convene and consult through barriers to trade. The gains of global trade are very big, particularly for smaller countries, but are helpful to all. The organization has often been sidelined in regards to key trade agreements, like EU ignoring WTO verdict on stopping prohibited subsidies for Airbus. Countries are now getting into bilateral or local trade deals as opposed to global agreements.

Moreover, there are numerous specialized committees, working groups and working parties which deal with the individual agreements and other areas like environment, development, membership applications and regional trade agreements. Thus WTO serves as a forum for the member of trade issues. In this way, the WTO is engaged in devising a “Multi-lateral Trading System”.

Finally, the WTO is a forum where countries continuously negotiate exchanges of trade con­cessions. The object is to further lower trade bar­riers all over the world.