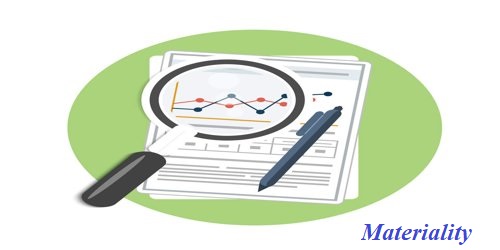 Materiality is an essential consideration in determining the appropriate type of report for a given set of circumstances.

A misstatement in the financial statements can be considered material if knowledge of the misstatement would affect a decision of a reasonable use of the statements.

Materiality has been allocated proportionately to each account without regard to expected monetary misstatements or audit costs. It is based on the subjective judgment of the auditor as to the inherent risk relative to size, and the probability of misstatements. It is a conservative approach and is inefficient in terms of audit effort. In Plan B, larger materiality allocations are made to accounts receivable and inventories, for which more misstatements are expected and the costs of detection are higher.

(c) The relationship between Materiality and audit evidence

Materiality is one of the factors that affect the auditor’s judgment about the sufficiency of audit evidence. In making generalizations about this relationship, the distinction between the terms materiality and material account balance mentioned previously must be kept in mind. For example, it is generally correct to say that the lower the materiality level, the greater the amount of evidence needed (inverse relationship).

The normal practice is that all misstatements of possible significance encountered during an audit are documented in the file. Some of them are adjusted by the client. Others are not. Most auditors accumulate the unadjusted misstatements discovered during the count of the audit in the schedule of unadjusted errors, or what some auditors refer to as the “over and under” schedule. The schedule can then be used to make decisions as to whether the cumulative effects of the unadjusted misstatements are material. Some auditors of small entities prefer to see that all identified errors are adjusted, which means they have no need for such a schedule.