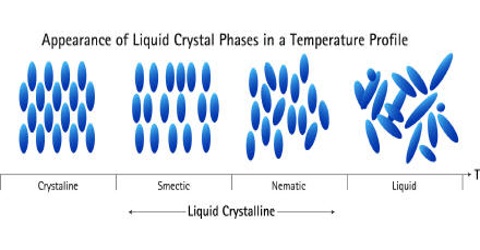 In a liquid, the molecules have no orderly arrangement. The molecules can move with respect to each other in a random manner, so liquids are able to flow. In a solid, the particles are present in a highly ordered pattern, but they cannot move from their positions as they are held rigidly in place. Particles in the solid state cannot flow. Certain organic compounds, exhibit properties characteristic of both liquid and solid in a temperature range just above their melting points. These are called liquid crystals.

They are fluids but their molecules are arranged in a highly ordered way. At temperatures above this range, the order is lost and they become like any other liquid. Liquid crystal displays (LCD’s) are found in calculators, wrist watches, TV screens and a host of other objects in use.

Three types of molecular arrangements, known as nematic, smectic and cholesteric liquid crystals have been identified. Several unsymmetrical molecules that have approximately rod-like shapes behave as liquid crystals. Some examples are shown below along with their chemical formulas: 4, 4’-Dimethoxyazoxybezene, 4-butyloxy-4-ethanoylazobenzene, Cholesterylbenzene.

Smectic liquid crystals show greater order. The molecules are parallel to each other and are arranged in layers that are one molecule thick. These are able to slide readily over each other. Liquid crystals of this type are turbid and viscous.

In cholesteric liquid crystals, the molecules are arranged in thin layers but they are aligned parallel to the layers in the nematic fashion, with slightly different orientations from one layer to the next. 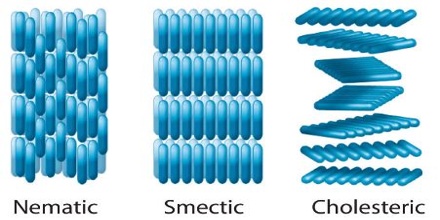 The use of liquid crystals is based on their special electrical and optical properties. In liquid crystal displays (LCD’s) a thin layer of nematic liquid crystal is placed between two electrodes (at least one of which is transparent) that are arranged on the glass in the special pattern. In the absence of an electric signal across the electrodes the molecules a uniformly oriented. In this configuration, light passes readily through the cell. When a particular electrode segment is energized, the orientations of the molecules in the liquid crystal are changed and the substance becomes opaque. By activating appropriate segments in this way various numbers and letters can be formed and displayed. One advantage of the liquid crystal devices is that they use very little power.

In cholesteric liquid crystals, the presence of smectic-like layers gives rise to colours in the light scattered from them. The spacing of the layers depends on the temperature: consequently, different colours are observed at different temperatures. This effect is used to make liquid crystal thermometer. In medical science small difference of temperature on different parts of the skin of a patient due to abnormalities can be detected from the colour change of liquid crystals. The technique is called thermography.