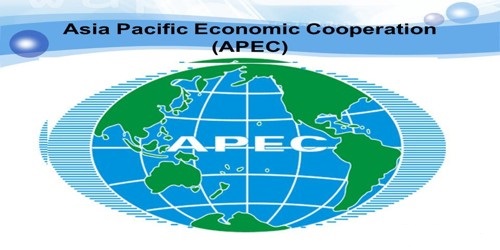 Asia Pacific Economic cooperation (APEC) was formed in November 1989 to promote multilateral economic co-operation in trade and investment in the Pacific Rim. It is composed to 21 countries that border the pacific Rim- both in Asia as well as the American. To accomplish its objectives APEC leaders committed themselves to achieving free and open trade in the region by 2010 for the industrial nations and by 2020 for the rest of the members. The differences between APEC and other regional trade groups is that there are no binding treaties. APEC ensures that goods, services, investment and people move easily across borders. Members facilitate this trade through faster customs procedures at borders; more favorable business climates behind the border; and aligning regulations and standards across the region.

Although the group is huge, accounting for more than a third of the world’s population, approximately 60 percent of World GDP and about 47 percent of World trade, if operates by consensus and does not have the same teeth as do other RTAS. In addition, if is not an official RTA from the perspective of the WTO so it does not appear as an official group on the WTO web site. It also includes countries that border the pacific. Such as ‘NAFTA countries Chile, Russia, china, Hong Kong, Taiwan, many members’ of AFTA and Australia and New-Zealand. It is more than an Asian trade block, but it is not a very Solid block.

APEC has the potential to become a significant economic bloc, especially because it generates such a large percentage of the world’s output and merchandise trade. APEC is trying to establish “open regionalism”, whereby individual member countries can determine whether to apply trade. Liberalization to non APEC countries on an unconditional, most favored nation basis or on a reciprocal, free trade agreement basis: The United States of America prefers the latter approach. The key will be whether or not the liberalization process continues at a good pace. The problem with APEC is its Size. A major reason of why regional integration like the EU and NAFTA Work is because of close geographic proximity and a unity of purpose. APEC has too many countries with, diverse interest and it was established as a counterforce to NAFTA. It is hard to maintain, serious progress for something bon of a defensive rather than an offensive strategy.

The prospectus of a Joint Stock Company

Name clause of Memorandum of Association