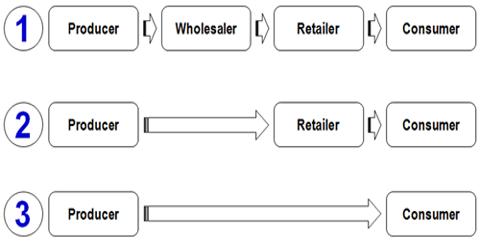 A direct channel of distribution describes a situation in which the producer sells a product directly to a consumer without the help of intermediaries. This is also called direct selling. The easiest and the straight mode of distribution is direct distribution, where the commodities are made directly obtainable by the manufacturers to clientele, without involving any intermediary. This is also called the zero level channel. Direct selling is one of the oldest forms of selling products. When the producer or the manufacturer directly sell the goods to the customers without involving any middlemen, it is known as the direct channel or zero level channel. In this channel, the outline producer sells products and commodities directly to customers. Some examples of direct channels are peddling, brand retail stores, taking orders on the company’s website, etc.

It is the simplest and straight mode of distribution. Direct channels are generally used by manufacturers selling consumable goods, exclusive goods, and whose target audience is geographically determined. Many service providers like holiday companies, also market directly to consumers, bypassing a customary retail intermediary, the travel agent. Selling through the post, internet or door to door selling, etc. are examples of this channel. For example – bakers, jewelers, Mc Donalds, Bata, etc.

A directly and straight relationship is established between the producer and the consumer. For example, when a manufacturer sells his goods through his own retail outlets (e.g., KFC, Hushpuppies); it is referred to as a direct channel. Similarly, mail order selling, internet selling and selling through own sales force, (e.g., Amazon) are an example of direct selling or zero level channel.

Methods of Direct Channel are: There are numerous examples that fall under this category. Here are a few we can consider:

(b) Online/Internet selling: Simply promote online, either via your own website, via Google Ads, or via social media ads. Customers can then set a direct order on your site or via email, and then you ship the goods to them via courier or your own vehicles.

(c) Courier or Mail order selling: This method of sales is one of the oldest distribution channels out there, but it is still significant today, as many companies use both couriers and also the post office to ship their products directly to the customer.

(d) Company-owned retail outlets: The biggest manufacturing firms can afford to open proprietary retail stores in diverse regions so that their products can get to the customer directly.

(e) Telemarketing: In this method, the producer will promote their product on television, getting into the details of the features of the product, its price, uses, and availability.

Advantage of selling through direct channels

Disadvantages of selling through direct channels