Addison explains this phenomenon in this way- as the emitted charge from the hot filament goes to the positive plate, so this charge is negative. If the plate is negative, it repels the emitted charge, as a result, no current flows through the circuit. This is known as Addison effect. British physicist Fleming first invented the vacuum tube by using Addison effect. This tube works as a rectifier that means it changes alternating current to direct current. This is the real beginning of electronics. During this time, a detector was very necessary for Marconi’s Radio. This tube fills up the need of the detector. As there were two electrodes in it, this is called a diode. After two years, an American named Lee de Forest invented another vacuum tube called triode.

Since it had three electrodes, it was named as a triode. Besides anode and cathode, there was another electrode known as a grid in it. Grid controls the flow of electric current from anode to cathode. It is wonderful that the triode can work as an amplifier. So triode plays a vital role in the development of communication. 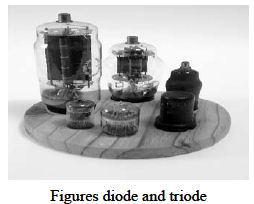 As the size of diode and triode valves are very large, they create problem to fix them in different electronic devices. The expense of power for it is more, it is less reliable and cooling system is necessary to keep it cool. So the scientists were searching for a semiconductor device as its alternative. Later they invented p-n junction diode. After long experiments, they were able to invent n-p-n transistor. Transistor works as an amplifier.

To set up several components in a single motherboard, problem creates. Sometimes it becomes impossible. So, IC or integrated circuit is invented. IC is such a creation using semiconductors like silicon, where millions of microscopic electric circuits are gathered in a place like a nail of our finger. Revolutionary changes took place in the design of IC chips after its invention in 1960.

Define and Describe on Drift Velocity