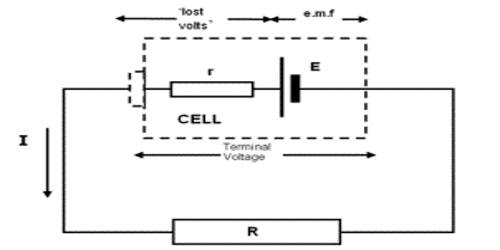 Lost volt: The potential difference between the two terminals of a cell decrease by an amount that does not contribute to the circuit, is called lost volt.

For realistic intentions, the e.m.f. of a cell may be calculated to a very close estimate by taking the reading of a high-resistance voltmeter connected straight across the cell terminals when the cell is not connected to anything else. The cause why this value is only approximate will be explained at the end of this section, but for the time being, we shall ignore the slight fault. Let us suppose that a voltmeter connected to the terminals of a dry cell of internal resistance 2.0 n gives a reading of 1.5 V. This is the e.m.f. of the cell (Figure (a)).

The current flowing in the circuit is given.