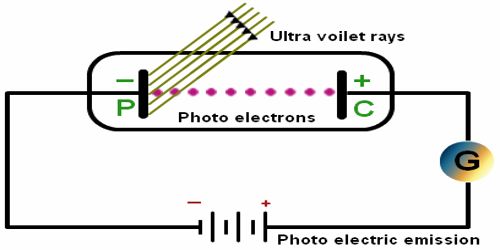 The photoelectric effect refers to the emission, or ejection, of electrons from the surface of, generally, a metal in response to incident light. Perform this experiment using a quartz tube, two zinc plates, cathode and anode plates, ammeter, key, a ring and a variable resistor. In this experiment C is an evacuated quartz tube. There are two plates of zinc inside the tube. One is A and the other one is B. A coating of alkali metal of sodium or potassium or lithium etc is there in the plate A. In that experiment a coating of lithium dioxide (Li2O) is there on this plate A. The plate A is connected to the negative terminal of the battery and the plate B, an ammeter and a variable resistor R are connected to the positive terminal of the battery (Figure). By changing the value of R, the potential difference between the plates is collected. 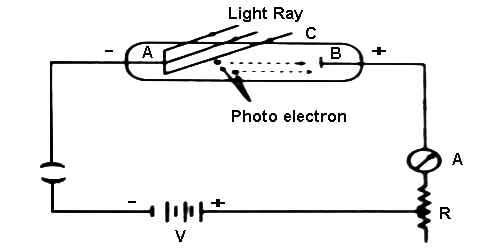 From the above discussion stopping potential, threshold frequency and work function may be defined in the following way.

Work function: The amount of energy needed to emit electron having zero velocity from the surface of a metal is called the work function of that metal.

Define Waves and its Characteristics