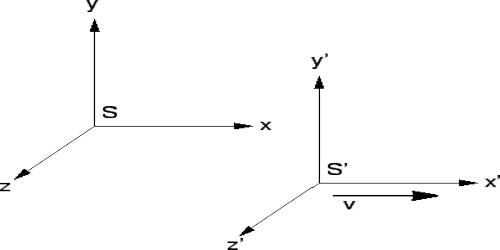 If two events occur simultaneously in two separate frames, then naturally two sets of coordinates will be obtained for the two frames. The equation which is obtained in order to establish the relation between the two sets of coordinates for those two events is called the Galilean transformation equation. In physics, a Galilean transformation is used to transform between the coordinates of two reference frames which differ only by constant relative motion within the constructs of Newtonian physics. 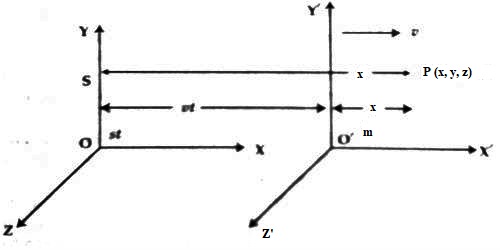 Suppose ‘st’ is the stationary frame of reference on the earth’s surface. With respect to it the velocity of the moving m frame along X-axis is v. At time t = 0, if both the origins of the two frames O and Oˊ are at the same place, then after time t = tˊ, point Oˊ will be at a distance ‘vt’ from the point O. If the co-ordinate of the point P is (x, y, x) in the ‘st’ frame, then the coordinates of that point in the frame in will be,

Since the frame m is in motion along X-axis, so there will not be any change in Y and Z axes. That means,

By differentiating the equations (1) to (3) the transformation equation for velocities for the frames st and m are obtained.

Again, according to the second postulate of special relativity, the speed of light will remain same in stationary st and be moving in frames of reference. But in Galilean transformation, it will be different.

Special Theory of Relativity and its Fundamental Postulates