Home Physics Motion in Opposite Direction

If two bodies start moving opposite to each other and if the velocity vA of the body ‘A’ is considered positive, then velocity vB of the body ‘B’ is to be taken as negative.

Example (A): Look at the two figures below. In the first figure two cars are moving in the same direction [Fig (a)] and in the second figure, they are moving opposite to each other. How will you determine the relative velocity between them? Here, in case of two parallel linear motion, the following two motions are to be considered for determining relative velocity.

Here the relative velocity of ‘A’ with respect to ‘B’ will be, 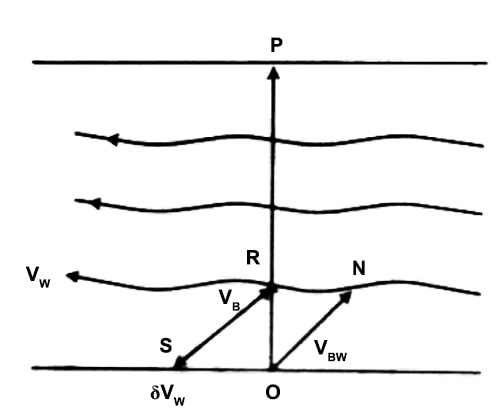 Example (b): Suppose a person from one side of a river at point O wants to go by boat exactly to the opposite side of the river at point P, then the person is to row the boat in the direction ON (Fig).

Conclusions: Following conclusions may be drawn from the above example:

(1) If two bodies move in the same direction, then by subtracting their velocities relative velocity can be obtained.

(2) If two bodies move in the opposite direction, then the relative velocity is obtained by addition of the velocities.