Home Physics Use of First Law of Thermodynamics in Adiabatic Process 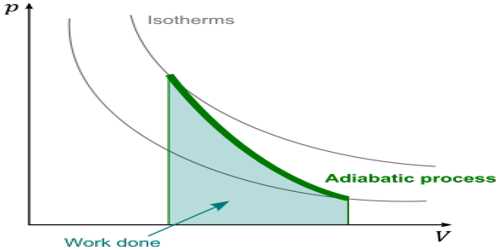 Use of First Law of Thermodynamics in adiabatic process

That means, during adiabatic expansion internal energy of the system decreases due to external work is done, consequently, temperature also decreases.

Similarly, also in case of adiabatic contraction or conservation dQ = 0. In case of contraction work is done on the system, so W is negative. Hence from equation (3) we get.

or, u2 – u1 = dW, where u1 and u2 are respectively the initial and final internal energies.

That means, during adiabatic contraction, the internal energy of the gas increases, so the temperature of the gas increases. Equations (4) and (6) are the mathematical form of the first law of thermodynamics in the adiabatic process. An example of an adiabatic process is a gas expanding so quickly that no heat can be transferred. The expansion does work, and the temperature drops. This is exactly what happens with a carbon dioxide fire extinguisher, with the gas coming out at high pressure and cooling as it expands at atmospheric pressure.