Home Physics What is X-ray?

X-ray is a kind of electromagnetic radiation. The wavelength of X-ray is much lesser than that of the ordinary light. Its wavelength is about 1010 m. X-ray was invented by Wilhelm Roentgen in 1895. Another name of Roentgen my is X-ray. When the nature of Roentgen ray was not known, for being an unknown ray it was named X-ray. The power of X-ray to penetrate any material becomes more as its wavelength gets smaller.

Ordinary light is visible and divided into different colours, but X-ray is invisible. If an opaque medium is placed in the path of ordinary light, it cannot penetrate the medium. On the other hand X-ray has high penetrating power. X-ray is produced in an X-ray tube. X-ray tube is a vacuum glass tube. There are two electrodes placed at the two ends of the glass tube. One of them is called cathode and the other is anode. There is a coil made of tungsten in cathode which is called filament. The cathode is heated by the current flowing through the filament. As a result, the electrons are freed and come out. If a high potential difference is applied between the electrodes, the electrons are accelerated with very high speed and hit the target anode. Due to this, the motion of electrons suddenly stops and X-ray is produced.

Here, the kinetic energy of electrons transforms into electromagnetic wave. This radiation of small wavelength is the X-ray. Therefore, if electrons with high speed strike a metal, then a type of radiation of unknown nature having high penetrating power and of very small wavelength is produced from the metal. This radiation is called is called X-ray. In figure (1) the essential parts of an X-ray tube are shown. 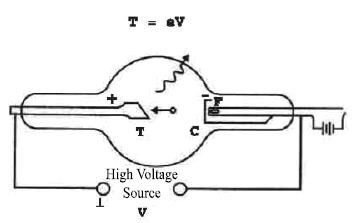