Home Physics Production of Electricity by a Magnet 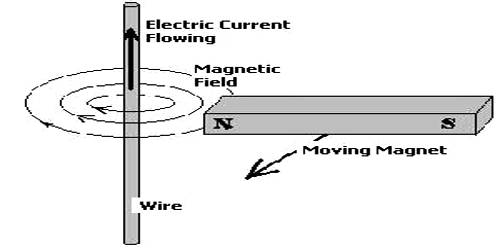 The mechanical energy moves the wire into the magnetic field of the magnet so that the wire cuts through the magnetic lines of force. As a result, electric current is produced. We know that that electric energy is produced due to the relative motion between a magnet and a coil. Scientist Faraday first presented the production of induced current by an experiment shown below.

If the magnet is stopped the galvanometer will come to stationary state 0. So, it is proved that as long as there is a relative motion between the magnet and the coil, there is an induced current and electric energy is produced.

What is Magnetic Flux?