For different positions of charged object, the nature of the lines of force of an electric field varies. Lines of force of a few electric are described below. For the simplicity of description the conductors are taken as spherical. 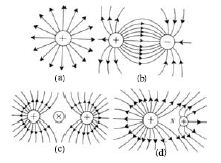 Define and Describe on Drift Velocity