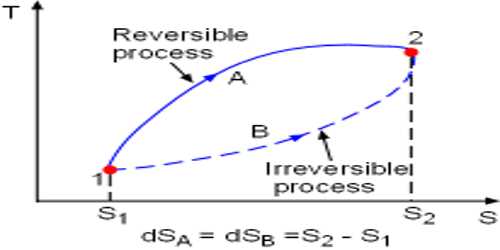 Characteristics and examples of Irreversible process

Irreversible processes are a result of straying away from the curve, therefore decreasing the amount of overall work done. These can be defined as a process in which the system and the surroundings do not return to their original condition once the process is initiated. This process is a thermodynamic process that departs from equilibrium.

The process which cannot be retracted in opposite direction by reversing is called an irreversible process. It is also called an indelible process. For instance, heat flow between two bodies occurs due to the temperature gradient between the two bodies; this is, in fact, the natural flow of heat. Similarly, water flows from high level to low level, current moves from high potential to low potential, etc.

The irreversible process occurs suddenly and spontaneously. In nature, all the processes occur spontaneously. So, natural phenomena are irreversible. In this process, the system never shows the tendency to go back to its initial state. It is a very rapid process and thermodynamic equilibrium is not maintained. By releasing pressure on a sample and allowing it to occupy a large space, the system and surroundings are not in equilibrium during the expansion process.

Examples: Some of the examples of the irreversible process are given below.

(i) When current flows through an electric resistor heat is produced. It is an irreversible process.

(ii) Heat produced due to the function of two bodies is an irreversible process. This is because that work done against friction is transformed into heat and that heat can never be transformed into work.

(iv) When a bullet is fired from a gun, an explosion of gunpowder takes place. This explosion takes place very quickly. This process is an irreversible process.

There are many factors due to which the irreversibility of a process occurs, namely:

Co-efficient of Performance of a Refrigerator