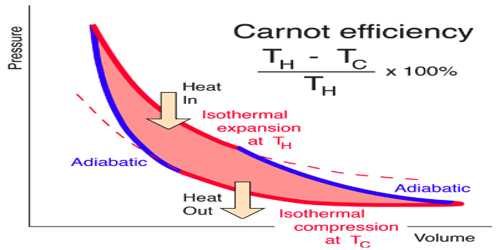 Before discussing Carnot cycle we should have some idea about Carnot’s engine. Sadi Carnot (1832), a French scientist planned an engine which is free from all defects. It is an ideal engine whose efficiency, is 100%. It is never possible to give its physical existence. It is only an imaginary engine. In reality, a Carnot’s engine works in four steps. Carnot developed the foundation of the second law of thermodynamics, and is often described as the “Father of thermodynamics.”

Carrot’s cycle takes heat from a working substance by the reversible process. In heat engines, an ideal cyclical sequence of changes of pressures and temperatures of a fluid, such as a gas used in an engine, conceived early in the 19th century by the French engineer Sadi Carnot. Starting from a fixed pressure, volume and temperature, some heat is transformed into work by an isothermal and an adiabatic expansion and an isothermal and an adiabatic contraction by rejecting the rest amount of heat into a heat sink the system goes back to its initial state.

It is used as a standard of performance of all heat engines operating between a high and a low temperature.

Application of Newton’s Laws of Motion: Towing a Boat