Time period: The time interval in which the wave is repeated that is the times required for one complete vibration of a wave transmitting particle is known as its time period. It is expressed by the letter T and its unit is second (s).

Amplitude: To produce a wave the particles need to vibrate about their equilibrium position. The maximum displacement of a wave transmitting particle from the position of equilibrium is called amplitude. In the figure ‘a’ is amplitude. 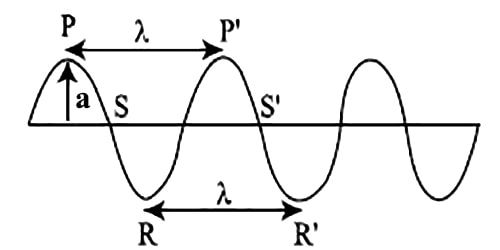 In the figure, the particles of points P and P’ or R and R’ are in the same phase.

Wave velocity: The distance that a wave travels in one second in a particular direction is called wave velocity.