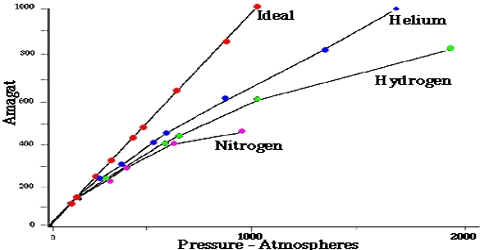 The behavior of Real Gases: The Amagat’s Curves

The ideal gas law equation PV = nRT is not obeyed by most gases, particularly at high pressures or low temperatures. This was experimentally established by Regnault, Amagat, and others. Only Hydrogen (H₂) and Helium (He) baffle this movement and the curve rises with the rise of Pressure (P) from the very beginning.

The ideal gas law can be derived by means of kinetic molecular theory by making two very significant assumptions that are not proper for real gases:

During the nineteenth century, Amagat showed that the product of P and V, i.e., PV, is not quite independent of P, even for gases like H2, O2, N2, etc. This is contrary to Boyle’s law. The nature and magnitude of the deviation are clearly demonstrated from a plot of PV against P as in Figure. These curves are known as Amagati curves. In these curves, PV, an arbitrarily taken as unity at 1 atmosphere and at the temperature of the experiment It a gas obeyed Boyle’s law the curves would be horizontal lines with a constant ordinate equal to RT. 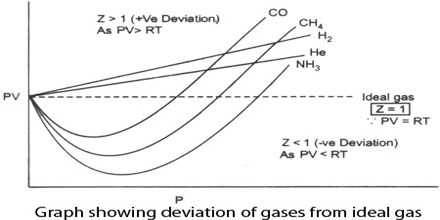 From Amagat’s curve, we can see two types of result for real gases.

It will be observed that the curve for hydrogen shows a steady rise in the value of PV as P increases; for the other gases shown it first passes through a minimum and then rises for still higher values of P. Based on these experiments the following conclusions were made:

(a) the inert gases give curves exactly like hydrogen.

(c) at relatively high temperatures most gases follow curves of the type obtained for hydrogen.

The behavior of real gases may also be described in terms of a compressibility factor Z which is defined as. 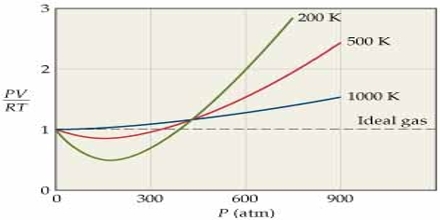 The volume occupied by a certain gas at 600C and 200 atm are 0.124 L. Calculate the compressibility factor of the gas?

Solution: Substituting the data in equation Z = PV/RT; and solving for Z;

Principle of Equipartition of Energy