Our solar system was formed billions of years ago. Everything in the Solar System orbits or revolves around the Sun. It consists of numerous celestial bodies including planets, satellites, asteroids, comets, meteorites, and a massive star. The Sun contains around 98% of all the material in the Solar System. Our solar system has eight planets, their moons, and satellites, and they are all orbiting the Sun. Our solar system forms a part of the Milky Way Galaxy. The eight planets are Mercury, Venus, Earth, Mars, Jupiter, Saturn, Uranus, and Neptune. Various celestial bodies in our solar system revolve around the Sun directly or indirectly.

It is believed that around 4.6 billion years ago, the gravitational collapse of a giant interstellar molecular cloud gave shape to our solar system. A major part of the collapsing mass collated at the center, that formed the Sun. The result of the planets trying to fly away, at the same time that the Sun is trying to pull them inward is that they become trapped half-way in between. The remaining mass flattened into a protoplanetary disk and formed the planets, satellites and other objects in the solar system. Balanced between flying towards the Sun and escaping into space, they spend eternity orbiting around their parent star. Our solar system is believed to have evolved substantially since its inception. Many new moons have come into shape from the gases and dust around the planets. 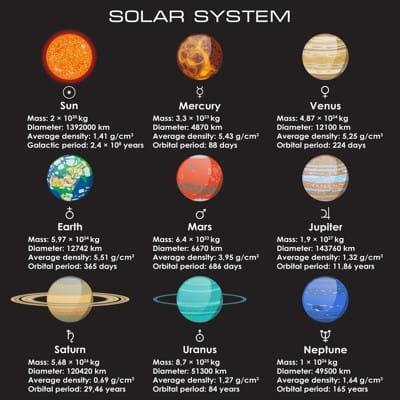 Mercury – The smallest planet in our solar system is Mercury, which is also closest to the Sun. Mercury can go as high as 450 degrees Celsius but surprisingly the nights here are freezing cold. It has a diameter of 4,878 km and it does not have any natural satellite.

Venus – It has a toxic atmosphere that always traps heat. Venus is also the brightest planet and it is visible to the naked eye. It has a diameter of 12,104 km. It does not have any natural satellite.

Earth – It is covered two-third with water. Its atmosphere which is rich in nitrogen and oxygen makes it fit for the survival of various species of flora and fauna. Earth has a diameter of 12,760 km and It has one natural satellite that is the moon.

Mars – This planet has a reddish appeal because of the iron oxide present on this planet. It is a cold planet and it has geological features similar to Earth. It has a diameter of 6,787 km and it has two natural satellites.

Jupiter – It is the largest planet in our solar system. It has a strong magnetic field. It largely consists of helium and hydrogen. It has a diameter of 139,822 km and it has as many as 79 natural satellites.

Saturn – Saturn’s atmosphere is quite like that of Jupiter because it is also largely composed of hydrogen and helium. Saturn has a diameter of 120,500 km and it has 62 natural satellites that are mainly composed of ice.

Uranus – It is the lightest of all the giant and outer planets. Presence of Methane in the atmosphere this Uranus planet has a blue tint. Uranus has a diameter of 51,120 km and it has 27 natural satellites.

Neptune – Neptune’s atmosphere is composed of helium, hydrogen, methane, and ammonia and it experiences extremely strong winds. It has a diameter of 49,530 km and it has 14 natural satellites.

For thousands of years, astronomers believed that Earth was stationary and formed the center of the universe. It was in the 18th century that the astronomers accepted that Earth orbits around the Sun.

In the 2nd millennium BC, Mercury, Venus, Mars, Jupiter, and Saturn were identified by ancient Babylonian astronomers. Later, Nicolaus Copernicus also identified them. Uranus was discovered by famous astronomer, Sir William Herschel in 1781. Neptune was discovered by English astronomer and mathematician, John Couch Adams in the year 1846. It was in the year 1930 that the ninth planet, Pluto was discovered. Pluto used to be the ninth planet but IAU changed the definition of planet and Pluto did not meet the standards so it is now a Dwarf planet. Astronomer Clyde Tombaugh discovered Pluto which is now identified as a dwarf planet.

Scientists and astronomers have been studying our solar system for centuries and then after they will findings are quite interesting. Through continuous research, astronomers have found out several surprising facts about the universe and our solar system. Various planets that form a part of our solar system have their own unique geological features and all are different from each other in several ways. Our solar system is ever-evolving and newer facts are being discovered and studied by researchers year after year.