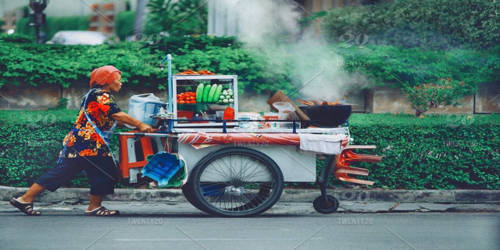 Life of a Street Hawker

A street hawker deals in various things by hawking from street to street. He is a seller of a variety of things. He carries his materials on the head and sometimes in hand and sometimes in a small handicraft. He often carries his goods for sale in his hands or over his shoulders. He moves from street to street of all big cities and towns with his things to sell. He generally buys his goods at a cheaper rate and sells them at a good profit. Some sell toys, clothing’s sweets, fruits, etc. some sell utensils, some sell newspapers while some others sell things of domestic use.

A street hawker is very cunning. He knows his business very well. He goes from one street to another with his moving shop and tries his best in various ways to attract to notice of the customers. His customers are children and women. He knows many tricks to convince the customers. He sells his things after haggling and bargaining. He brings toys, sweets and other things for children and sells them at a fixed price at a good rate. He often sings some comic songs loudly to draw a crowd of children around him. He also brings bangles, ribbons, clothing, fruits, utensils, fancy goods and things of domestic use for women. He brings one kind of goods for children, another kind for women and yet another kind of man. He speaks in different ways to draw the attention of his customers. As he passes along the street, he makes a peculiar cry to attract the attention of his customers. The children here and there gather around him and stop him. A hawker also knows the time/hour of his business. Sometimes he cheats simple customers. So we should be careful of the street hawkers who are cheats. He does not come when housemasters are at home. Rather he comes when housemasters are out of home and when women are free from their household work and duties.

A street hawker’s life is not easy and comfortable but it is rather difficult and full of hardship. The hawker is a man of small means but earns his bread in his own way. However, as a whole, a street hawker should never be neglected. His profit is generally low. He lives from hand to mouth and leads a simple life. He brings things of our daily use to our doors. So he does some good. We should respect his hard labor and never look down upon him.