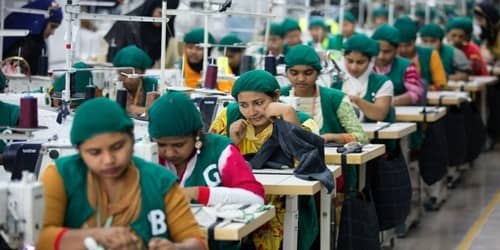 Persons working in a garment factory are garments workers. S/he is a person who earns his/her livelihood by working in a garment factory. An ordinary garment worker in our country leads a very laborious life. About 5 million people work there. More than 90% of workers are female. In the morning, s/he starts with many other workers. His/her day starts very early in the morning and ends at about 10 p.m. She/he starts for a working place at about 7 am. S/he often works overtime so that she can earn some extra money. She/he is to pass a long way every day to reach the factory. After cooking food and taking breakfast, she starts for her workplace on foot or by a crowded bus. She/he goes to the factory on foot. S/he is paid very low. Sometimes on the way to the destination, she /he is teased with slang words from various corners. S/he becomes the object of other’s pity. He/she is to tolerate all bad comments. It is miserable for her. In the factory, he/she works in a congested room. In fact, she leads a very miserable life.

Generally, a female garment worker may be illiterate or have a little education. She eats the poor lunch with her colleagues in the factory. Almost every day he/she takes his/her lunch from home. She is given a break for half an hour. Within this time she cannot take lunch from her house. She has to work for more than twelve hours. She works in the factory for long hours till deep at night. Sometimes her bosses ill-treat her. She likes working in a factory rather than in a household. But she tolerates everything silently. She is used to doing overwork. Though he/she gets a very poor salary, she/he expends it very wisely. After paying house-rent, she remains some money to support herself. She/he leads a very simple life.

The life of a garment worker is full of hardship. If she gets any disease, she cannot go to a doctor. In a word, a major portion of national income depends upon his/her hard work. She hardly enjoys the pleasures of life. Though she has a great contribution to our economy, she has no social identity or dignity. Her life is like a machine. So he/she should have better opportunities in the factory and society to lead a better life. We should respect her for her contribution. At the same time, we ought to ensure her security.