Electric potential determines in which direction the flow of electric charge takes place when two charged conductors are electrically connected. If two positively charged metallic spheres are connected by conducting wire (fig) then any of the following phenomena may occur. 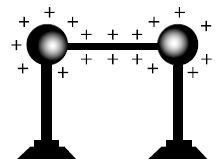 The movement of charge from one sphere to another does not depend on the quantity of charge of the spheres but it depends on electric potential. The positive charge will flow from sphere to sphere of higher potential to that if lower potential. This flow of charge will continue until the potential of these two spheres become equal. So, potential is an electric condition of a charged conductor that determines whether it takes or gives up charge when connected to another charged conductor by a connecting wire.

Uses of Static Electricity in Photocopier

How to Measure the Unit of Electric Current?

Joule’s laws for the Generation of Heat