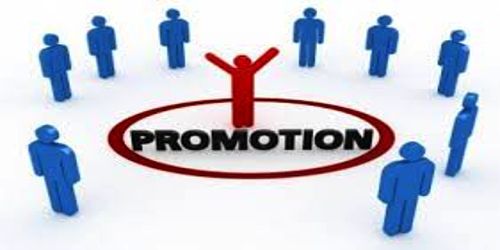 Promotion means the employees present position to higher position. This may be the result of either a successful application for an advertised vacancy or, where appropriate, personal promotion. In simpler terms, it refers to upward movement in present job leading to greater responsibilities, higher status, and better salary.

Vertical Promotion: To grant Promotion for the employee in the same department is called vertical promotion. It is an easy process of Promotion. As the low-level employees know that if they work well in the present level they will get a promotion. So they work with more inspiration. Many people think that this process is the best promotion process. But there are also some problems. This type of promotion results in greater responsibility, prestige, and pay, together with a change in the nature of the job. Ex-Computer Operator to Asstt. Admin. Off.

Horizontal Promotion: In which process employees are transferred from one sector to another with more responsibility in same position. If in one sector there is no chance to get the promotion. But the employees have much knowledge and experience ma get promotion in another sector it is also called horizontal promotion. It involves an increase in responsibilities and pay and a change in designation. Ex-Lower Division Clerk to Upper Division Clerk.

Dry Promotion: Dry promotions are sometimes given inline of increases in payment. Designations are dissimilar but no modify in responsibilities. The promotee may be given one or two annual increments.

How will you identify the threats to a company’s future profitability?

Which Factors should be contained in Circular Letter?