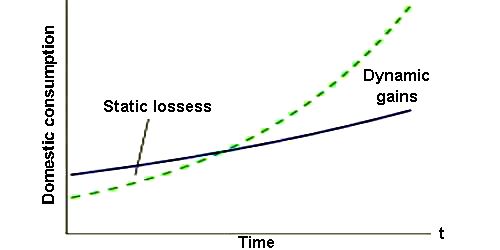 Dynamic Gains from Trade accrue to a country over a longer period of time. The sector involved in the trade are the ones Mat ‘are directly affected by trade are the first to experience positive effects. Over a period of time, these positive effects spread in other sectors as well, gradually impacting the entire economy. It is this trade that makes possible the division and specialization of labor on which higher productivity of different countries is so largely based. These are referred to as the Dynamic Gains From Trade. Dynamic gains refer to the contributions which foreign trade makes to the overall economic growth of the trading countries.

Examples of Dynamic Gains from Trade can be –

(3) Increase in the overall standard of living – International trade leads to equalization of factor prices (factor prices in different countries gradually get equalized on account of international trade). Trade also leads to a downward pressure on general price levels as commodities which are available cheap in other countries can be imported. All this leads to a rise in the standard of living of the population.