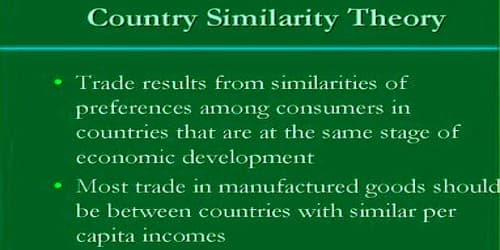 Swedish economist Steffan Linder developed the country similarity theory in 1961, as he tried to explain the concept of intra industry trade. Linder’s theory proposed that consumers in countries that are in the same or similar stage of development would have similar preferences. In this firm-based theory, Linder suggested that companies first produce for domestic consumption. When they explore exporting, the companies often find that markets that look similar to their domestic one, in terms of customer preferences, offer the most potential for success. Linder’s country similarity theory then states that most trade in manufactured goods will be between countries with similar per capita incomes, and intra industry trade will be common. Simply, this theory describes the idea that countries with comparable qualities are mainly likely to trade with each other. These qualities might include the level of development, savings rates, and natural resources, among others.

The country similarity theory is based on the following principles:

In contrast to classical, country-based trade theories, the category of modem, firm-based theories emerged after World War II and was developed in large part by business school professors, not economists. The firm-based theories evolved with the growth of the multinational company (MNC). The country-based theories couldn’t adequately address the expansion of either MNCs or intra industry trade, which refers to trade between two countries of goods produced in the same industry. For example, Japan exports Toyota vehicles to Germany and imports Mercedes-Benz automobiles from Germany.

Most trade today occurs among it seems that related countries –

Similarity among countries on the above aspects allows their products and services to be sold without difficulty in each other’s markets.

Unlike the country-based theories, firm-based theories incorporate other product and service factors, including brand and customer loyalty, technology, and quality, into the understanding of trade flows.

This theory is often most useful in understanding trade in goods where brand names and product reputations are important factors in the buyers’ decision-making and purchasing processes. Therefore the country similarity theory consists of the value that the majority of trade in manufactured goods should be between nations with comparable per capita income and that intra manufacturing trade in manufactured goods should be universal.

According to this theory, two types of trade is being traded. They are: