Home Literature The Fox Without a Tail 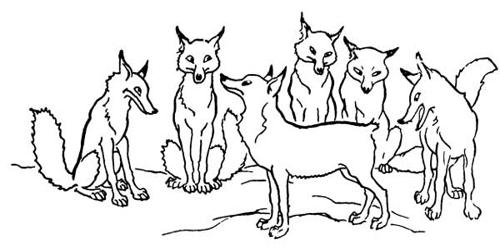 Once upon a time, there lived a very clever fox. He had been caught in a trap, succeeded at last, after much painful tugging, in getting away. But he had to leave his beautiful bushy tail behind him. One day, when Mr. Fox was walking through the jungle, he fell into a trap. He landed on his tail. When he got out of the trap, he left his tail behind. Without his tail, Mr. Fox looked very strange and he felt very sad and ashamed. “What am I going to do?” he cried. But Mr. Fox was very clever. He thought and thought. Then Mr. Fox had a good idea, so he made a plan. “I’m going to ask all the foxes to come to a meeting in the jungle,” he said to himself.

When the foxes knew about the meeting, they came quickly. “Mr. Fox is very clever,” they all said. “What’s he going to tell us?” When Mr. Fox saw all the foxes there, he felt very important and pleased. “Now listen, my friends,” he said. “Why have I asked you to come here? “It’s because I’ve made a very important discovery. Do you want to know about it?” The foxes felt very excited.”? Yes, we do,” they all replied.

“Then listen to me,” Mr. Fox said. “My friends”, said Mr. Fox. “I’ve discovered something. I’ve found something new. Tell me, why do we need our tails? Are they necessary’?”

The other foxes were silent. Mr. Fox wanted to trick them, but they didn’t know. They thought and they thought. Then one of them said. “We don’t know. We’ve never thought about our tails before.”

Mr. Fox felt very pleased and said, “Friends, You’ve never thought about your tails, but I have. I often think about them. I’ve thought about them a lot and I’ve made a very important discovery. Dear friends, we don’t need our tails. They’re not necessary. In fact, they’re useless. They look ugly and dirty. Look! I’ve cut mine off. Now, be clever like me and cut yours off too! Cut them off now!” “What a good idea!” said some of the foxes. “When we cut off our tails, we’ll look beautiful” Mr. Fox was very pleased when they said, “You’ll look nice and clean too.” he said, “Look, here’s a knife. I used it myself Now you can use it too.” “you didn’t use a knife,” said the wise old fox.

“You fell into a trap and lost your tail. Now you want us to lose our tails. Look, my brother, does Mr. Fox look beautiful without a tail”?

Moral: As you sow, so shall you reap.

Do not listen to the advice of him who seeks to lower you to his own level.

A Short Note on Joynul Abedin