Home Biology Describe with a Labelled Diagram of a Typical Ovule 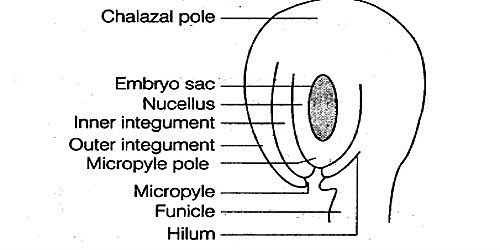 Ovule: The round shaped microscopic organs present in the placenta of the ovary which is turned to seeds after being fertilized are called ovule. An ovule is a female megasporangium where the structure of megaspores takes place. It is the structure that gives rise to and contains the female reproductive part. 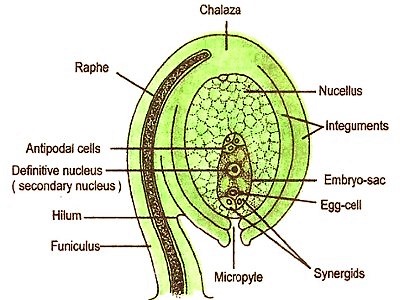 Fig: Structure of an ovule

Structure of ovule: In the flowering plant, the ovule is situated surrounded by the segment of the flower called gyanecium. Each ovule consists of nucellus surrounded by two integuments and a stalk or funiculus. A typical ovule is composed of the following organs:

The exposed area of the anterior part of an ovule is called Micropyle. It is a narrow pore produced by the projection of integuments. It marks the point where the pollen tube enters the ovule at the time of fertilization. It is a small opening which is left by the integument in the ovule for the passage of pollen tube into the ovule. The micropyle is a pore-like structure on one side of the ovule, where integuments are absent.

It is the longitudinal ridge formed by the lengthwise fusion of funiculus with the body of the ovule in a typical anatropous ovule.

It is the female gametophyte which contains the egg apparatus, antipodal, and polar nuclei. Female gametophyte covered by a thin membrane is called embryo sac. It is situated in the nucellus. A mature embryo sac consists of a group of three cells at each of its ends, lying on either side of a big centrally placed nucleus.

Unit of Classification in Taxa