When we climb up a mango or a guava tree, we do so by holding on to the long straight parts of the tree. This part is the stem of the tree. The stem is another main part of a plant. If you have experienced sitting on a tree while tasting its fruit, the long extended parts you sat on are branches. Branches are also parts of the stem. Roots, branches and sometimes leaves are attached to the stem. The place from which branches and leaves grow is stem. It has node, internode, and buds. 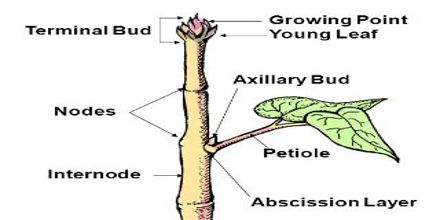 (i) Node – The place from where the lanes grow is the node. A node is a point on the stem from which leaves or buds arise.

(ii) Internode – The space between the two nodes is the internode. The inter-node helps the plant to grow and keeps it erect. No roots, leaves or branches grow from the internode.

(iii) Bud – A bud is an embryonic stem that has the potential for further plant growth. The angle formed by the stem and the leaf is called axil of a leaf. It may develop into a leaf, flower, or both. Generally, buds grow in the axil. However, it may also grow at the apex of the stem. The auxiliary bud grows in the axil and apical bud grows in the apical position of the stem or branch. Such buds are called leaf buds, flower buds, and mixed buds, respectively. As a result of injury, adventitious buds may be formed also in the internode of the stems, in leaves, or roots. The “eyes” of the potato tuber are buds.

The Physiology of Fruit Ripening

Discuss the Structure and Habitat of Plant Polysiphonia