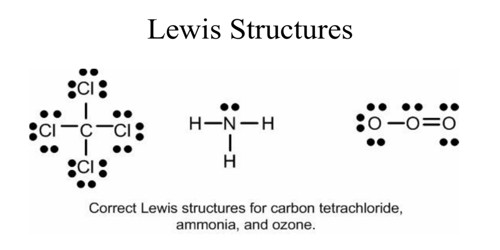 Lewis structures are very useful to predict whether ionic or covalent bonds will form between certain elements, and in what ratio they will combine. VSEPR predicts molecular shape well. However, they assume that pairs of electrons are all localized into bonds. Occasionally the true shape of a molecule (discovered by X-ray crystallography) shows that some electrons must be delocalized over more atoms.

The Lewis dot structure approach gives a superior idea of how the electrons are scattered within a molecule when dissimilar atoms bond together. Though, it cannot tell us the form of the molecule will be.

The geometry of molecules containing covalent bonds. The structure of molecules such as PCI5, SF6, and IF7 in which the central atom has more than 8 electrons in its valence shell (violation of octet rule).

Lewis structures assume that electrons are either entirely located on one atom ( in ionic compounds) or shared equally between two atoms (covalent bonding). Ionic bonding and perfect covalency (perfect sharing) are two extremes. Most compounds are neither perfectly ionic nor perfectly covalent, but somewhere in between. The formation of molecules such as BF3, AlC13 in which the central atom has less than 8 electrons in its valence shell. Small highly charged cations (e.g. Mg2+, Al3+) can polarise the electrons in large anions giving covalent nature to some ionic compounds.

How bond is formed between Sodium and Chlorine Atoms?