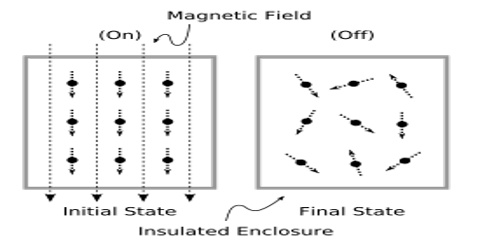 It has now been established that spontaneous processes are accompanied by increase of entropy and the entropy of a system at equilibrium is maximum. As a matter of fact the spontaneous processes are associated with an increase in chaos that exists in any molecular system. For example let consider the diffusion of gases. It can be well imagined that due to diffusion the movement of the molecules has become more chaotic. The increase in chaotic movement of the molecules becomes even more apparent in fusion of solids and evaporation of liquids etc. The consideration of these and similar other processes led to the concept of entropy as a measure of randomness or chaos. An increase of entropy means an increase of randomness of the system. These ideas enable us to predict the sign of ∆S0 for a reaction or a physical process even without knowing the values of entropy of substances. The entropy usually increases in the following situations-